Favorites of the year:
A Darker Shade of Magic (Shades of Magic #1) by V.E. Schwab
Train Dreams by Denis Johnson
Superman: The Unauthorized Biography by Glen Weldon
The Case of the Team Spirit (Bad Machinery #1) by John Allison
anything by Lois McMaster Bujold

Huh, these numbers seem pretty low, but they're what I recorded on Goodreads. (Which I'm usually pretty good about keeping updated.

Yes, I know it’s been a long time since I wrote here; and yes, I have notes about various topics to post about in the future, with topics ranging from Star Wars: The Force Awakens to ... well, I can't find my other notes, so I'll just assume it's all Star Wars, all the way down.

But I had a few moments in a coffee shop the other day, after I wrote a quick book review on Goodreads, and I thought, “Wouldn’t it be fun to do some small-scale data-mining of my reading trends for 2015, vis-a-vis 2014?”

To which the only reasonable answer is, “Yes.”
First impressions:

Pretty much all my life--even now--I wouldn't pass a bookstore without walking in. When I was in grad school, surrounded by books, I sometimes chose to reward myself with a quick trip to the bookstore--just to look.

Well, maybe not just to look. Over the years, I'd collected quite a few books. Too many books, really, especially when I was about to move from Chicago to San Angelo, TX. It was hard, but I had to let some books go, selling what I could to used bookstores (Myopic and Powells) and giving the rest to the library's charity used bookstore.


I also took some time this weekend to actually run the numbers. Unfortunately, I wasn't keeping track of my collection before leaving Chicago, so I only have numbers for the two recent cullings:

No conclusions or metaphors or theories; I just wanted to record those numbers somewhere.
at 9:00 AM No comments:
Labels: personal

Library of America Story of the Week Read-Along 283: Caroline Henderson, Letter from the Dust Bowl (#283)

A first-person account from the Dust Bowl, by a farmer who kept up a little side-line in column writing for a while. Caroline Henderson actually chose to be a farmer, it seems, after a near-death experience convinced her to follow her girlhood dream. Which is a fascinating bit of backstory for a rather short and uncompelling account of the Dust Bowl.

Not a lot going on here, though there are one or two details that are interesting, mostly about her tone when it comes to government aid programs and how those who believe in refusing government dictates are actually damaging everyone. (In this case, the aid program involves plowing the soil along the contour, so as to lessen erosion; and those who continue to plow straight are making the airborne dust worse.)
at 9:00 PM No comments:
Labels: 20th century, Library of America, non-fiction

A very short note about a very long improv festival

In the marathon, eight core performers improvise non-stop for 40+ hours. The first year it was 40, but it's been going up by an hour ever since; this year's show was 46 hours long. Each hour has a different theme or structure; so one hour might be improvised Shakespeare, another hour might be a musical. And each hour also can feature some guest performers. But those eight core performers are there for the whole ride.

"Why would anyone do that to themselves?" is the question you might be asking. Except you wouldn't be asking that question if you were there at the last hour. Instead of performing a lot of scenes, the cast talked about their struggles, both on and off stage, and what it meant to them to get up on the stage.

That last hour was not a great hour of improv, but it was a great hour about improv. It was incredibly moving to hear those eight people--stripped and raw after 46 hours--talk about fear, isolation, separation, self-doubt, anxiety.

And it was so moving precisely because that's what improv is about overcoming. You don't have to be afraid because you're not alone. You don't have to be crippled by self-doubt because if you stumble, you are surrounded by people who will help carry you. Together, the whole cast will cross the finish line; or if you don't make it to the finish line, well, screw it, it was an imaginary finish line anyway, and it might as well be here where you are.

This was very moving to me because I'd been feeling a little bad about my improv skills recently. Last week, I got a chance to play in the Maestro, the longest-running improv show in Austin. For the first time, I was playing on the main stage; and I was playing with a bunch of people who have years more experience than I have. And I didn't freeze, exactly, but I wasn't exactly warmed up. I couldn't really get out of my head. I had OK scenes and I got some good laughs. (When you're playing the Alphabet Game and you have to start a line with the letter X, audiences love it when you pull out "xenophobe.") But I never felt comfortable. I wondered if maybe I'd reached the end of my development as an improviser; or if I was actually backsliding.

Then I saw the last hour of the improv marathon and listened to these crazy, sleep-deprived performers, and I was moved by their openness and their rawness and their sincerity and commitment. That may not be where I am now, but it's an amazing goal.

So if anyone is starting to talk about the cast for next year's 47-hour improv marathon, I'd love to be on that list.
at 9:00 AM No comments:
Labels: Austin, improv

Library of America Story of the Week Read-Along 282: Helen Keller, I Go Adventuring (#282)

It's rare that I put one of these out on time; or at least, for the past few months, it seems like I'm playing catchup, reading and writing about two or three Stories in a weekend. Often I find myself saying, "I've got a lot to do and what am I even doing these for anymore?"

But I'm reminded why by today's piece (which I'm really writing about a week after it was released). That is, the Story of the Week is best when either (a) I have something interesting to say about it, probably because it's a story or on a topic I've read before; or (b) I have never read the piece and probably wouldn't have come across it outside of this project.

I remember studying Helen Keller a little bit in elementary school. (Did everyone have to read The Miracle Worker? Is there a little bit of "if she can learn, why can't you?" in teaching about Helen Keller to sighted, hearing students?) But I'd never read her before. It was interesting to read this piece about her thoughts on New York and what it meant to her.


Tremulously I stand in the subways, absorbed into the terrible reverberations of exploding energy. Fearful, I touch the forest of steel girders loud with the thunder of oncoming trains that shoot past me like projectiles. Inert I stand, riveted in my place.

Which is a strange mix of metaphors with a lot of feeling behind it. Forest of steel--thunder of trains--shooting like projectiles. And of course, I love how she starts out tremulous and ends up inert, riveted, almost a piece of the machinery of the city. It's an intensely felt section--but I'm not sure it's a good feeling. Keller celebrates the city, but it's so easy to imagine this turned into a Thoreauvian denunciation, like:


We do not ride on the railroad; it rides upon us. Did you ever think what those sleepers are that underlie the railroad? Each one is a man…. 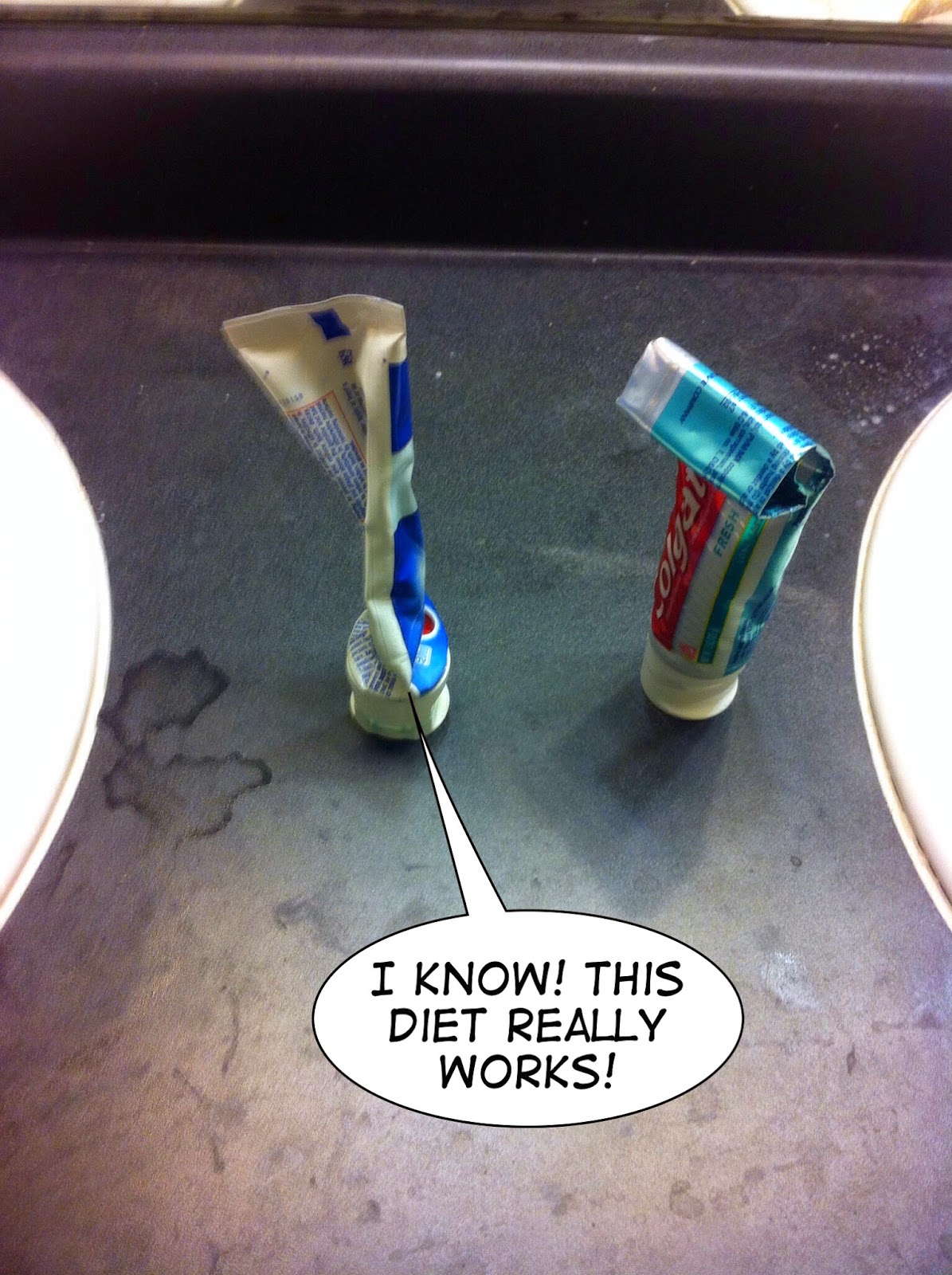 Most surprising cross-casting connection: Lauren Lapkus, formerly locking up humans in Orange is the New Black, is here locking up dinosaurs. In both, she has a boyfriend, thus stymying office romance.

Most retrograde gender politics: Oh my fucking god, women don't have to be mothers, jesus fucking christ. Seriously, most of the movie seems to be about punishing Bryce Dallas Howard until she gives up her job to take care of some kids who have very few redeeming qualities. Did you ever think you would miss Dr. Ian Malcolm hitting on Dr. Ellie Sattler?

Most baffling speech: B.D. Wong by a clear mile: in two successive lines he claims that this whole lab is only there because he's doing this work AND then he says that if he's not there, someone else will do this work instead. But that incoherence and muddiness of his character--that's not unique to him. All the characters are like that.

Most interesting coincidence (or not): a seven-year old came up with most of the best ideas in this movie many years ago! (Read this--and then subtract the Nazis part.)
at 9:00 AM No comments:
Labels: movies, science fiction

Library of America Story of the Week Read-Along 281: Ambrose Bierce, A Psychological Shipwreck (#281)

Not my favorite Bierce, though maybe because I constantly talk and think of him. I don't remember a time before I knew of him, since I grew up with two Bierce books in the house. (Can Such Things Be? and In the Midst of Life.)

The headnote says that this is a favorite for anthologizing and that readers have loved to puzzle out the connections. I can't say I understand why, since it seems both clearly in line with Poe and other earlier writers who played with some idea of trances; and seems clearly related to the late 19th-century obsession with spiritual forces and physical connections.

(I can't remember who wrote it, but there's a story from around this time of a seance where the spirit that comes knocking leaves a number when asked its name--and it turns out to be the number for one of the seance-participant's amputated foot. The idea of spiritual forces behind or inherent in the physical is so big at the point that Bierce is writing.)

What we have here simply seems to be a case of a man's spirit communing with the spirit of a relative; and beyond that, the notion that there are other relatives communing in spirit. What's the mystery?
at 9:00 PM No comments:
Labels: 19th century, Library of America, short story

Shower Awkward Comics #46: The arc of history bends towards justice--but come on, Gary 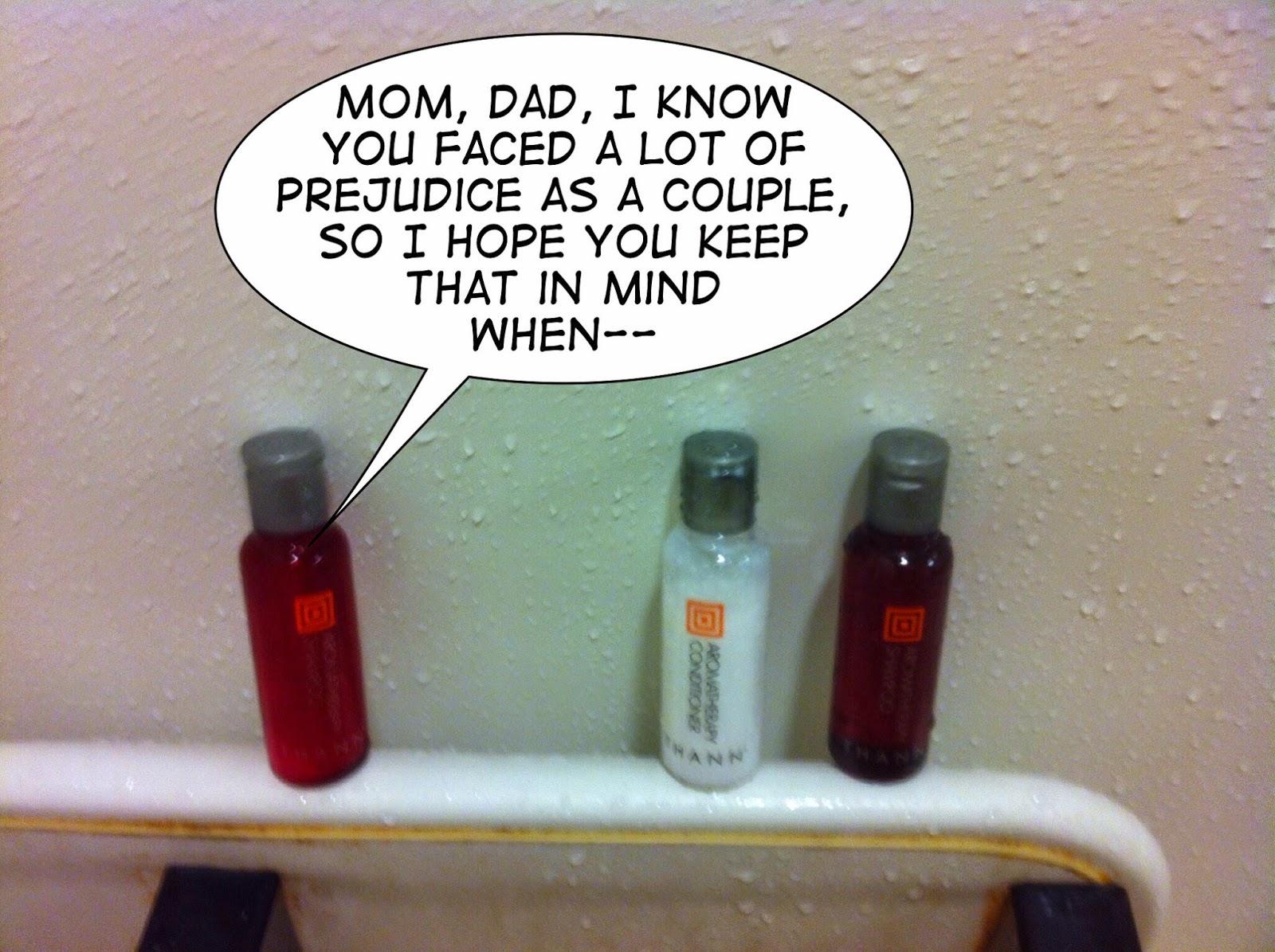 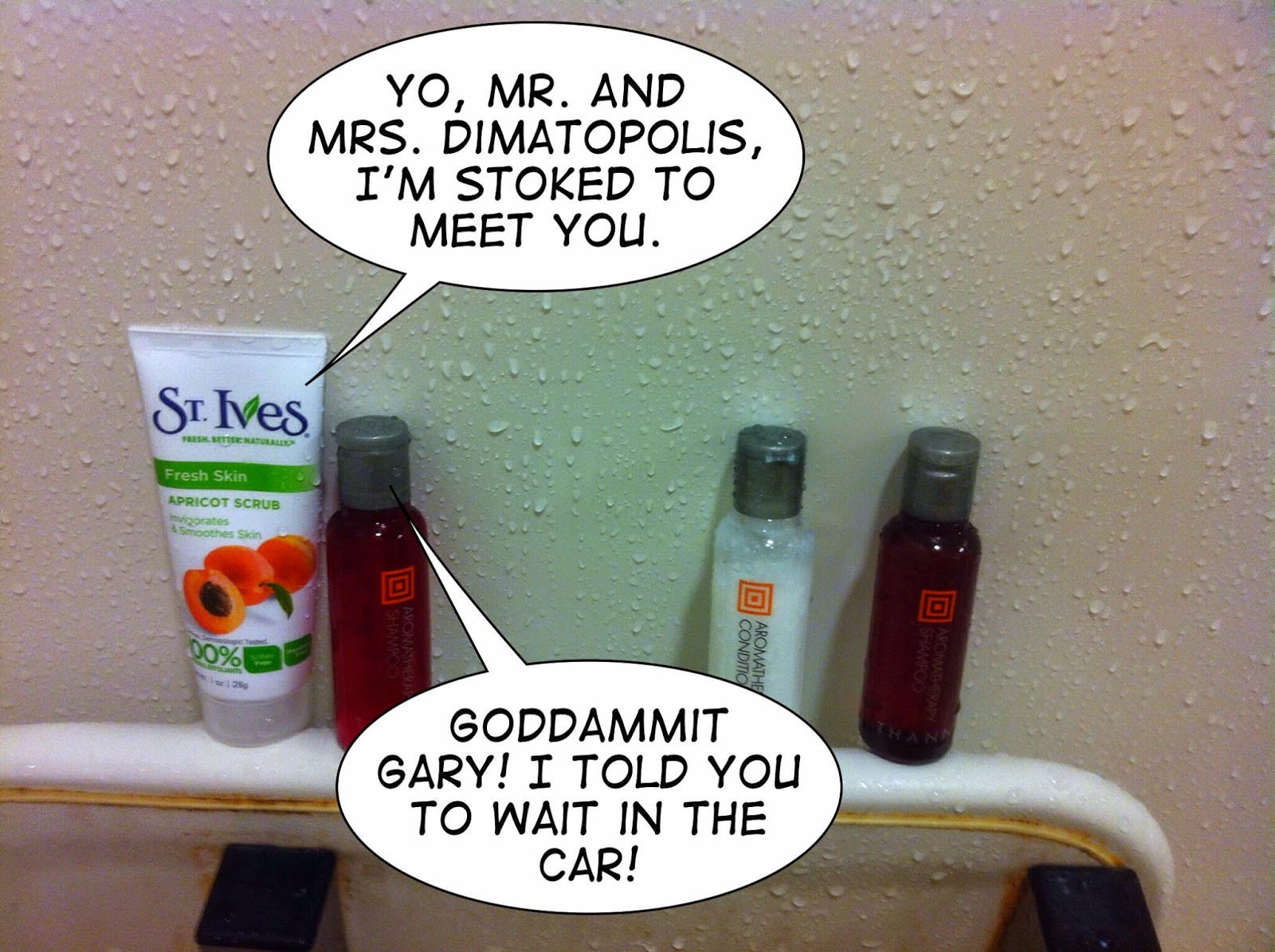 Library of America Story of the Week Read-Along 280: Frederick Douglass, Letter to His Old Master (#280)

In grad school, I took a class in the History Department called "Important Primary Sources in American History"--or something to that effect. So in one week, I devoured something like 1000 pages of slave narratives (the Library of America collection, actually).

But it never gets any easier. This short, humorous, cutting letter from Douglass to his former owner doesn't dwell on the horrors of slavery at any length. It mentions them in general (being robbed of education, etc.) or names particular events (being dragged to market, etc.) only sparingly; most of this letter is taken up by the joys of freedom.

And yet, those joys are so obviously contrasted to the crushing pains of slavery that this letter can get me teary eyed. Douglass's great skill here might be in how quickly he can veer from cutting and acid humor to straightforward pathos.

Edit: If you read this letter, make sure to read the LoA headnote, which tells the story of some strange meetings between Douglass and the family that formerly owned him. It's a great reminder of how strange and intimate the institution of slavery really was.
at 9:00 PM No comments:
Labels: 19th century, Civil War, Library of America, non-fiction 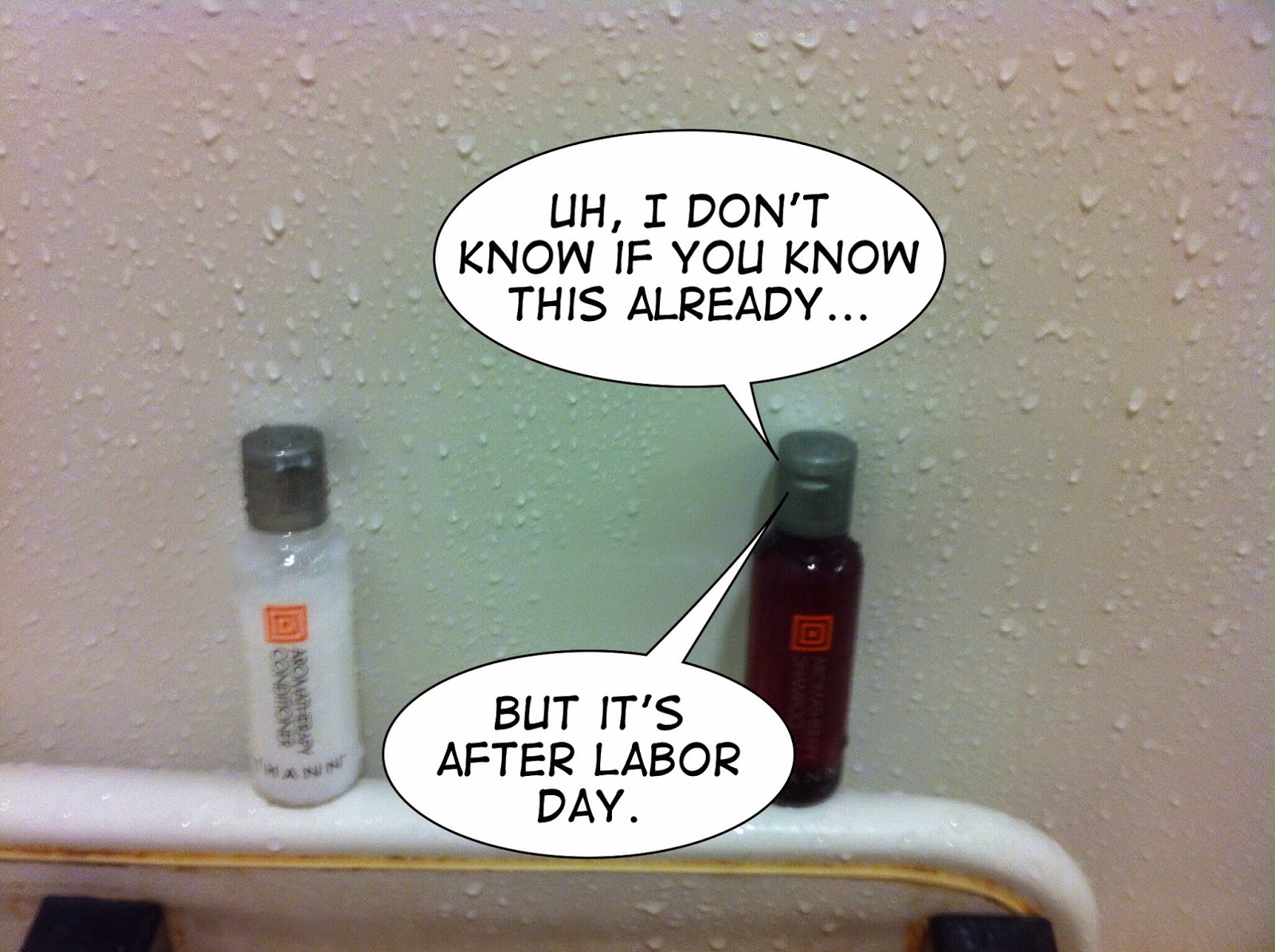